How long is Tuna season? | Get All The Details

Tuna is one of the most appealing seafood around the world. Anglers eagerly wait for the tuna season. However, you can’t precisely point out how long is tuna season because it depends on several factors.

Mostly, the tuna fishing season depends on the winter. It nearly ends when winter hits on full swing. You can also guess about the tuna season by observing the last winter season.

If the winter was severe, the tuna season will start from late July and last for a shorter time. Again, if the last winter was mild, then you can start thinking about fishing from June. 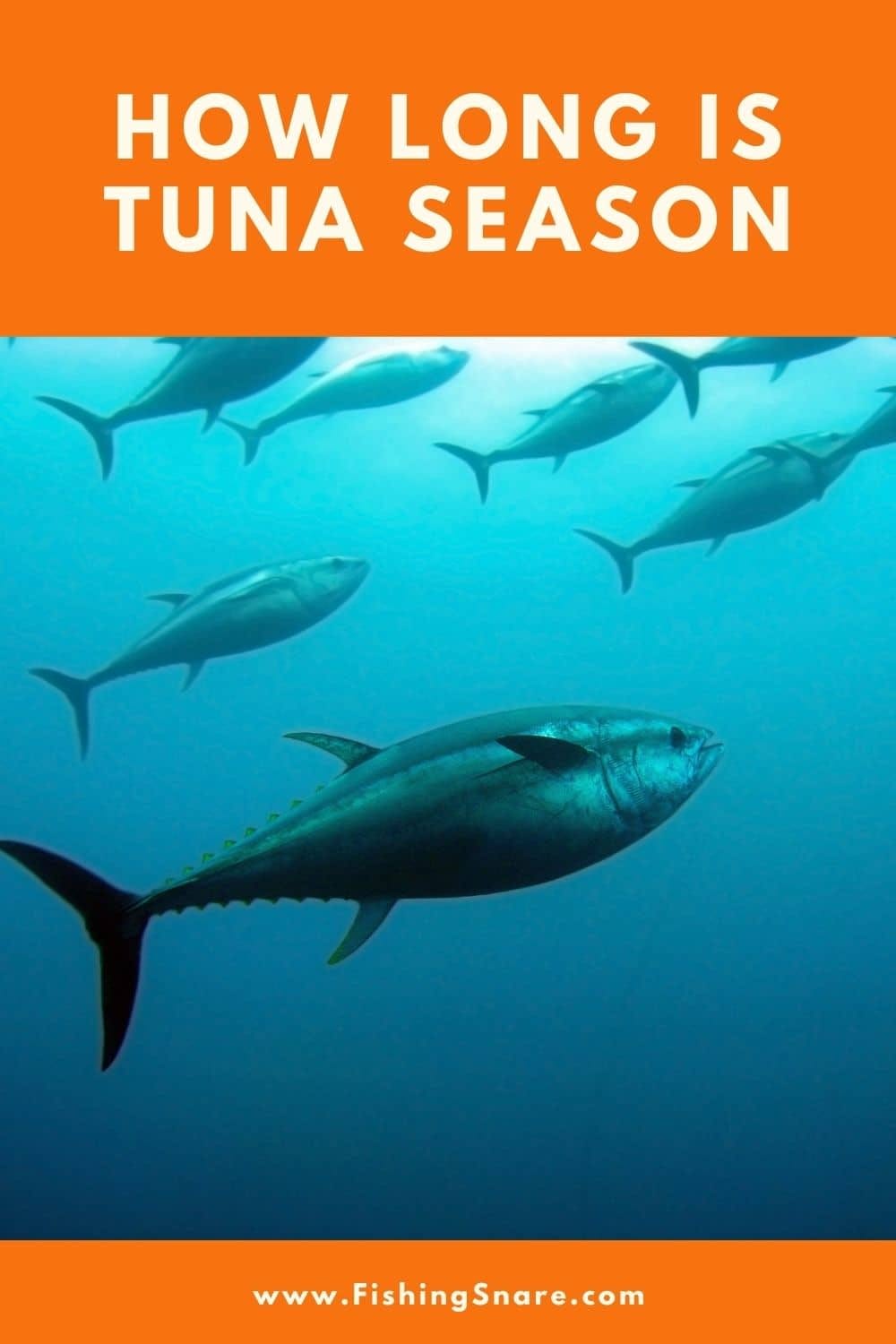 How long is tuna fishing season?

Tuna fishing is very adventurous and exciting. The best time for catching tuna is between August and September. The tuna fishing period lasts about six months, which starts in June and ends in November.

Tuna Season in the USA

Tuna season in the USA varies from state to state. Here, I will answer the most asked question,“ How long is the tuna season?”

I will mention most of the areas where tuna fishing is popular and say how long it lasts.

Florida is known as the capital of fishing. The warm tropical weather is absolutely suitable for catching fish. That’s why people don’t limit their tuna fishing season in Florida.

But it doesn’t mean you can catch tuna anytime. The excellent time for tuna Anglers starts from May and lasts till September.

Hawaii is a great tourist spot. If you want to find yellowfin tuna fish, you should pay a visit to Hawaii. Apart from surfing, you can catch tunas and enjoy the vibes of Hawaii.

However, if you want to know how long is yellowfin tuna season? Then I will say that the season runs from May to September. But the best months for tuna fishing in Hawaii are June, July, and August.

Louisiana is another hotspot for different seafood. You can find delicious seafood all around the year in Louisiana. You will find different types of tuna, such as bluefin, blackfin, or yellowfin.

Texas has a variation in its weather. If you are comfortable with the change, you can think about fishing in Texas.

Texas is known as the best saltwater fishing area in the United States. Local fishers suggest that the perfect time for tuna fishing will be from July to November.

If you are not fond of bluefin tunas and instead love yellowfins, pack your fishing gears and start angling in Delaware. You will find yellowfin tunas there most of the time in a year.

So how long is albacore tuna season in California? The time of albacore tuna fishing changes throughout the year. The most competitive fishing period is from July to August.

Besides, January to May and October to December are known as the low seasons for tuna fishing. Still, California is an excellent place that will offer all-time tuna fishing.

Albacore tuna can be caught in the summertime. But how long is tuna season in washington? The season might start from late June and last till November. However, the best time for albacore fishing is during August and September.

The northeastern region of New England is the best place for bluefin tunas. You will never get tired of exploring tunas here. The season starts in June and closes in November. You can catch 100 to 600 pounds of tunas from January to March.

Maine is a well-recognized Tuna spot in the northeast region. You might have an interest in knowing how long is tuna season in maine? In Maine, the tuna season runs from June to November.

Bluefin tunas are accessible here. But according to the locals, in December, anglers occasionally catch tunas as well. A six month tuna season is not enough for Americans.

How long is tuna season in Massachusetts?

Massachusetts is more popular and accessible for tuna fishing in the summer. The adventures of anglers reach a great height because of the competition among them.

Tuna season begins here from early June and lasts till the winter. But the perfect time will be August and September in this region. Depending on the weather, the tuna will be available here. Mostly Massachusetts is best for bluefin tuna.

How long is tuna season in the outer banks?

The most exciting bluefin tuna season begins in the outer banks. The early bluefin season starts in November, and it lasts until May. You can get tuna from 100 feet water in November and December.

But the most awaited season in the outer banks is the late one. You can get giant tunas in this season. The late-season starts in February and continues through the winter. You might need to travel 50 miles to fish some of the large bluefin tunas.

Other places for tuna fishing

The Bahamas is a world-class spot for water-related activities. But unfortunately, the tuna season is shorter there. It only lasts a few months from May to August

Cape Town is one of the exotic locations that is filled with the beauty of wildlife. Catching tuna in Cape Town is no less than a dream coming true. By the way, you will get a wide range of tunas in Cape Town, including yellowfin, longfin, skipjack, and bigeye tuna.

The major island of the Balearic Islands in Spain is Mallorca. Late May is the perfect time to get tunas here. In the springtime, you will get tunas enjoying the heavenly beauty of the island.

Tenerife is another island in Spain that is excellent for tuna fishing. Get ready to reach there between March to May for the best angling experience.

How long is wicked tuna season?

You can watch and know how long the tuna season lasts in different places. Each season of wicked tuna lasts for about three months and a half months. The show has aired many seasons since 2012 and ended in 2020.

I think you have a clear conception about how long is tuna season. Tuna fishing has always been fascinating for anglers. Everyone loves catching and eating large tuna fish.

The season of tuna fishing might vary a little because of the weather conditions. But more or less, it is the same all over the USA. In other places of the world, the season is mainly during summer and spring.

You can get ready with your gears and travel anywhere to get tunas. But if you are a US resident, you will quickly get access to tuna fishing anywhere inside your country.