Best Time To Catch Crappie Fish | Get All The Necessary Details

Crappie fishing is very popular in North America. People are always in search of the best time to catch crappie. But there is no specific time for crappie fishing because it depends on the weather and season.

But you need to use certain fishing tricks to get them quickly. I will discuss the timing of crappie fishing and also mention some fishing tips.

Black crappie, also known as calico bass, is a popular fish to catch in North America. Black crappies have dark spots all over their bodies. It has seven to eight spines around the dorsal fins.

These fishes have a preference for clear water for living. They can weigh up to five pounds. Moreover, the length of the body can be 5 to 12 inches.

White and black crappies are quite similar in appearance. The spots on white crappies remain at the sides. That’s why they appear to have a lighter color for the body.

The spines in the dorsal area are also less than black crappies. Usually, they have 5 to 6 ranges in this area.

Both black and white fishes tend to stay in a group in freshwater.

Best time to catch crappie for each season 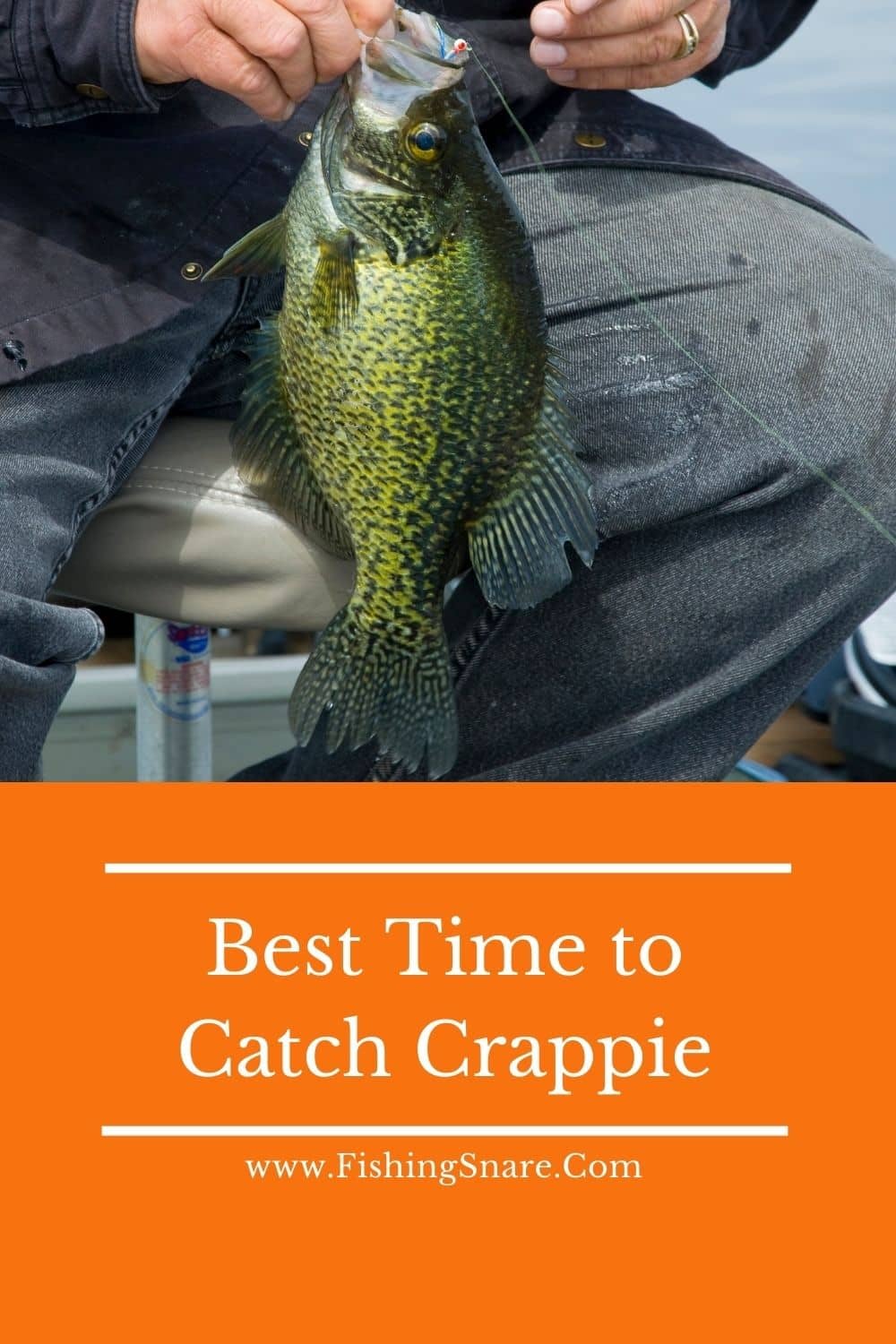 Spring is the best time for fishing crappie. It is known as their spawning season, and they usually spawn at 55°F. Sometimes the fishes drive deeper and spawn at different levels.

During the spring season, fish stay active at the warmest time of the day. If the water seems cold, they will try to remain there. That’s why the best time of day to catch crappie in spring is the lazy afternoon.

Again, when the weather changes and the water starts getting hotter, the time for fishing will also change. Anglers suggest fishing during the early morning or night time at this particular period of spring.

The summer season is not much suitable for beginners to catch crappie. You will need enough patience and directions to find crappie.

In summer, the scorching heat of the sun makes the water warmer. Crappies hide at the deeper levels. At that time, you can use electronic gadgets to catch them.

The best time to catch crappie in summer will be during twilight or at night. Crappies will search for food during this period, and using baits; you can catch them. If you can somehow find them near the shore, you can catch them using any trick.

However, summer fishing will be uncomfortable for you if you are not an angler. So it is better for beginners to search for another suitable time to catch crappie.

I don’t think fall is an excellent time to catch fish. But using good baits and jigs, you can make it possible.

Like, summer at night time you can catch some of them. The water stays warm during the daylight, and so they avoid moving around at this period.

However, you can find them in shallow water up to 10 feet in November or October. During this time, they become quite aggressive for storing fat to survive in the winter. You can use this advantage and try to catch them.

If you are lucky enough, you can surely get crappies in the fall. In my opinion, the best time to catch crappie in the fall is after dusk.

Winter is an inactive season for most fishes. But in the warmest part, you will see some of them.

At this time, you need to become watchful to catch crappies. Crappies stay offshore and inside deep water to avoid this situation. But you can get them near docks, underwater structures, or under trees, where they will remain in a group.

During this season, they will give sluggish bites. So you need to slow down and use your lure to catch them from a small distance.

The best time of day to catch crappie in winter is the midday or at the beginning of the afternoon.

The best month to get crappie

As I said before, no month can be declared the best month for crappie fishing. But spring is the best season to catch crappie.

During this spawning time, you will also get them in one place. You can enjoy this time comfortably for crappie fishing. Besides, some crappie fishing tips will help you get crappies quickly.

They tend to remain closer to the shore, which makes it easier for anglers to trick them. You can get a lot of crappies during this fantastic season.

The best and worst time to catch crappie in a day

How to catch crappie depends on their availability. When they are active, it becomes easier to see them. The best time to catch them is in their feeding hours. The feeding hours start from the late night, which is quite a relaxing time to get them.

Again, the dawn and dusk hours are preferable for getting them. These are also their feeding time. They move to shallow water to look for insects. You can take the chance and use some crappie fishing tricks to capture them.

The worst time for catching crappie is probably during the daylight period. At this time, the water remains very hot. As a result, the crappies move into deeper water. This tendency makes anglers suffer to catch crappies.

In winter, the afternoon becomes the best time to catch crappie. So fishing entirely depends on the temperature of the water.

Where can you find crappie?

Crappies are freshwater fishes. So you can easily find them in lakes, ponds, and a small section of water where the flow is less speedy. Again, some reservoirs contain this type of fish.

Artificial reservoirs are built especially for fishing activities. Crappies are introduced there for easy fishing.

Crappie feeds on worms and insects. You can use live baits to catch crappies. Minnows are the best type of live baits for catching crappies in the water.

Besides, you can use a bobber to adjust the bait to reach different depths of water. In case you use live bait, remain careful not to use an outsider to harm the specific ecosystem of a pond.

The preferable seasons are spring and summer for crappie fishing. But the fishes move around the water according to the variation of temperature. So the weather is significant to affect the staying of fishes underwater.

However, crappies always search for comfortable staying. Mostly they move around covered places. You can track them using an electronic device and work accordingly.

I think if you can select the perfect timing, it will automatically become comfortable for crappie fishing. Besides, you can apply some methods that we mentioned in our article.